The RRWMI conducts various research projects throughout the year.

Biological Inventories
Flora and fauna surveys are of biological importance in this area to identify a baseline of species composition.

Dr. Mike Maguigan
Director of the RRWMI
Science Bldg, 121A

Caddo Parish Groundwater Monitoring Wells, Phase 1:
South Shreveport and adjoining Caddo Parish is undergoing rapid development. Municipal and Parish officials are under pressure to approve new higher-density developments. The City of Shreveport water system is approaching capacity limit for supply and conveyance of water from the municipal system. The Institute, working with Caddo Parish, City of Shreveport and the Water Resources Committee of Northwest Louisiana has begun the development of a network of monitoring wells to evaluate the status of groundwater reserves/water quality in this rapidly developing rural to suburban area of Caddo Parish. Caddo Parish has agreed to drill and develop the monitoring network wells. Five wells have been drilled in this initial phase. The Institute will monitor water levels (monthly) and sample these wells for water quality analysis (quarterly).

Bossier Parish Groundwater Monitoring Wells:
The Institute is working with Bossier Parish to monitor shallow groundwater wells (<40 ft). The need for this monitoring came from issues arising with construction and utility work in the parish. The Institute continues to monitor and report on water levels as well as continuing to explore factors impacting high groundwater levels in the parish. 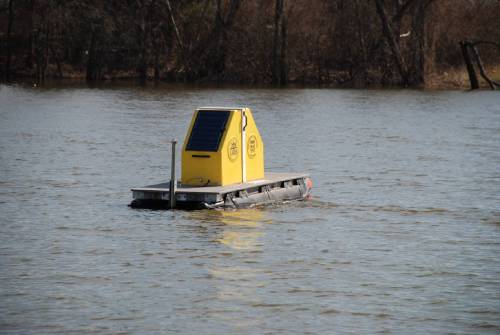 As part of the long-term park management plan developed by the advisory committee, the ecosystem inventory is considered a critical component. In order for the Red River Education and Research Park to serve its function as a true "living laboratory" which will benefit the environmental programs of the City of Shreveport and the Red River watershed in general, it is essential to determine and catalog the baseline environmental conditions of the park, including its flora and fauna. Surveys to determine the species of plants, amphibians, reptiles, mammals, fish, birds, and benthic macroinvertebrates occurring at the park have been in progress since 2006. A globally rare plant species, Carex decomposita, which grows on stumps and floating logs, has been documented from the park as a result of this inventory. 318 species of plants have been documented at the park, 68 (21%) of which were exotics (2008 MacRoberts, M. H., B. R. MacRoberts, and G. M. Hanson. Vascular Flora of C. Bickham-Dickson/Red River Education and Research Park, Caddo Parish, Louisiana: An Oxbow Lake Community, with Comments on Exotic/Native Species Ratios. Journal of the Botanical Research Institute of Texas 2(2): 1389-1406). Fish, mammal, bird, amphibian, and reptile species lists have been composed and are continuously updated.

The area has become a bird hotspot, with 263 species of birds having been documented at the park. The fish community reflects the direct connection of the oxbow with the Red River and the origin of the oxbow from the Red River. The mammal, amphibian, and reptile communities consist of species that are common representatives of this Northwest Louisiana area. The vertebrate populations and the overall biodiversity seen at the park are reflective of the seasonal flooding that inundates the park and the historic and current usage of the park by humans. Continued studies are needed to supplement documentation of the species occurring at the park and monitor changes occurring as a result of new biotic perturbations.

Hydrilla, Hydrilla verticillata
Hydrilla inundated the park's oxbow lake in the summer of 2007, completely clogging the inner arm of the lake (shown in photo). Subsequent summers have not produced as much growth as in 2007, but Hydrilla still grows throughout the oxbow lake. 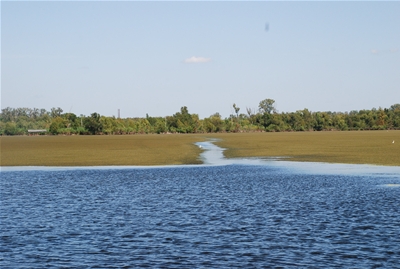 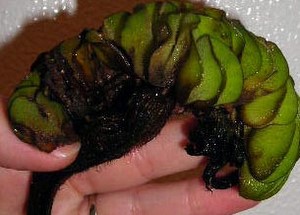 Bat Condos, Construction of an Artificial Bat Cave:
In the summer of 2004, an artificial bat cave was constructed at the LSUS Red River Education and Research Park. The cave was constructed from giant used tires from earthmoving vehicles. The tires were donated by AEP Southwestern Electric Power Company. The cave uses 26 tires of varying sizes and measures 53 feet in length. The entire structure is covered with native red clay and river sand. This is only the second artificial bat cave of this type ever constructed. It provides potential habitat for bats and other small animals as well as an alternative method for recycling the giant tires. The structure has ports for monitoring temperature, humidity, and ambient light as well as a probe to monitor external air temperature.

To have the RRWMI present information to your school or group, contact Director Dr. Mike Maguigan at mike.maguigan@lsus.edu.

Starting a successful career is closer than you think. With exceptional academics and generous financial aid, LSUS allows you to get your degree close to home while launching you to new heights.