Keith Hanson, chief technology officer for the City of Shreveport, was sitting at his desk sorting through bids. He’d been tasked by his boss, Mayor Adrian Perkins, to make Shreveport a better place to live by investing in so-called “smart city” technologies to improve city services, safety, and general quality of life. But every piece of equipment Hanson could put his hands on was expensive and piecemeal.

“What I quickly found was that there’s no commoditized ‘smart city’ product, right? There’s no top company you go to for every need,” Hanson said. “I can buy a sensor for $2,000 or a camera for $3,000, but I’d need hundreds of these and an integrated solution to make it all work. And since we’re government, companies try to overcharge. So, there seemed to be no way for us as a mid-size city to become a smart city on the budget we had. That’s when I reached out to LSUS.”

Smart city projects can be thought of as large-scale implementations of the Internet of Things, or IoT, where sensors and cameras are networked to provide real-time status updates on everything from traffic and road repairs to water quality and pollution. What results is massive amounts of public data that must be analyzed and cross-linked in an effective way to become meaningful. 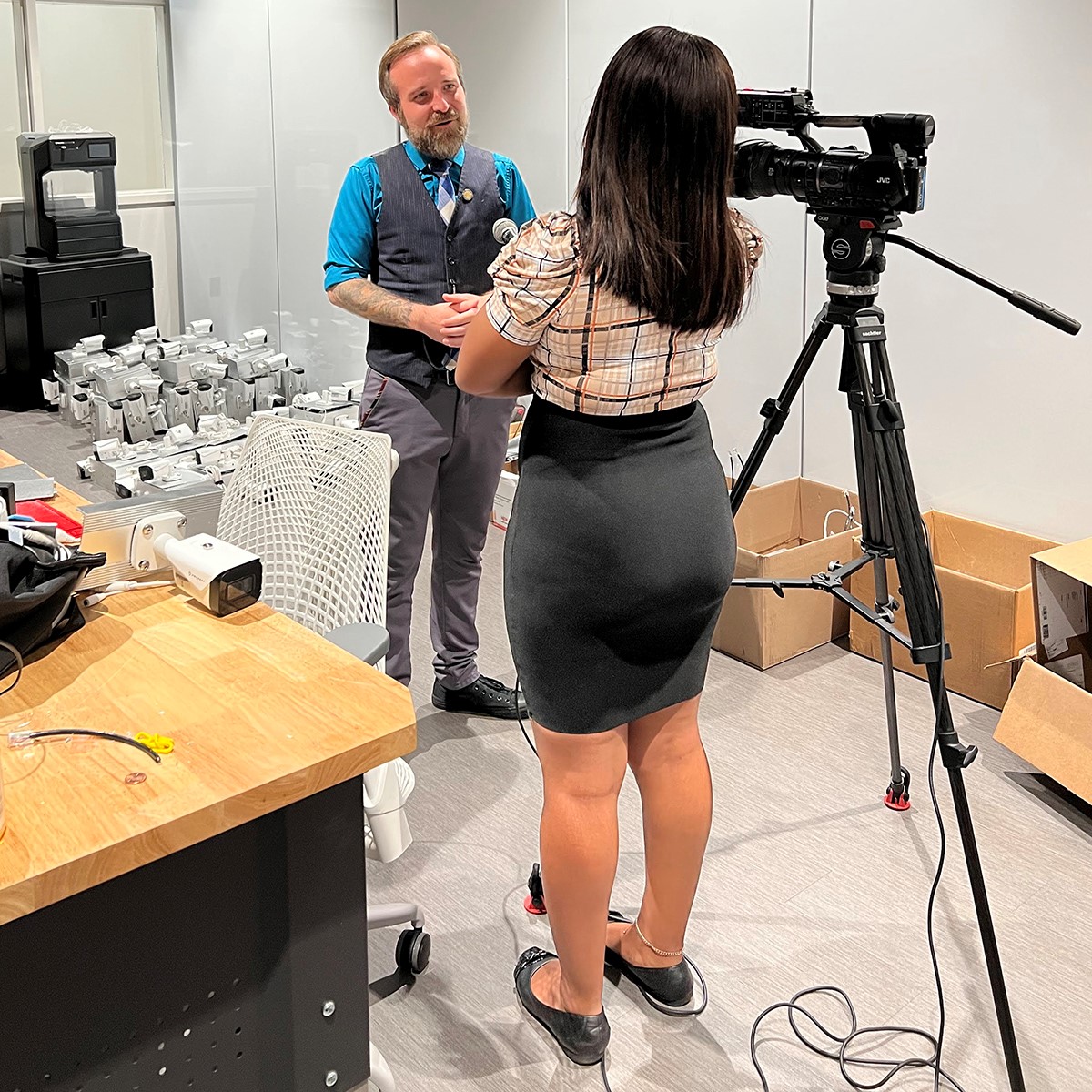 City of Shreveport Chief Technology Officer Keith Hanson was interviewed this summer in the LSU Shreveport Cyber Collaboratory about their ongoing collaboration to retrofit cameras into sleeker boxes with fewer wires. Photo by Erin Smith, LSUS.

“And what better way to do that than with AI?” said Hanson, who’d heard that LSUS had begun offering courses in machine learning and deep learning, the main technologies behind AI, in 2020.

The resulting collaboration between LSUS and the City of Shreveport combines high-tech with low-tech solutions. First off, LSU students developed a prototype of an affordable camera box to be mounted on the side of garbage trucks—Shreveport’s largest service fleet and the only public vehicle to go to every residential address every single week. LSUS Computer Science Assistant Professor Subhajit Chakrabarty then worked with the students to implement machine learning solutions to automatically identify objects in the captured camera footage—unfinished road work, heaps of abandoned tires, damaged signs, potholes, cars parked on grass, cars without license plates, etc.

“If a road repair hasn’t progressed in several months, we usually have to wait for citizens to make a complaint to even become aware of the problem,” Hanson said. “LSUS’ machine learning solution could help us flag that automatically and get us out to fix problems much sooner.” 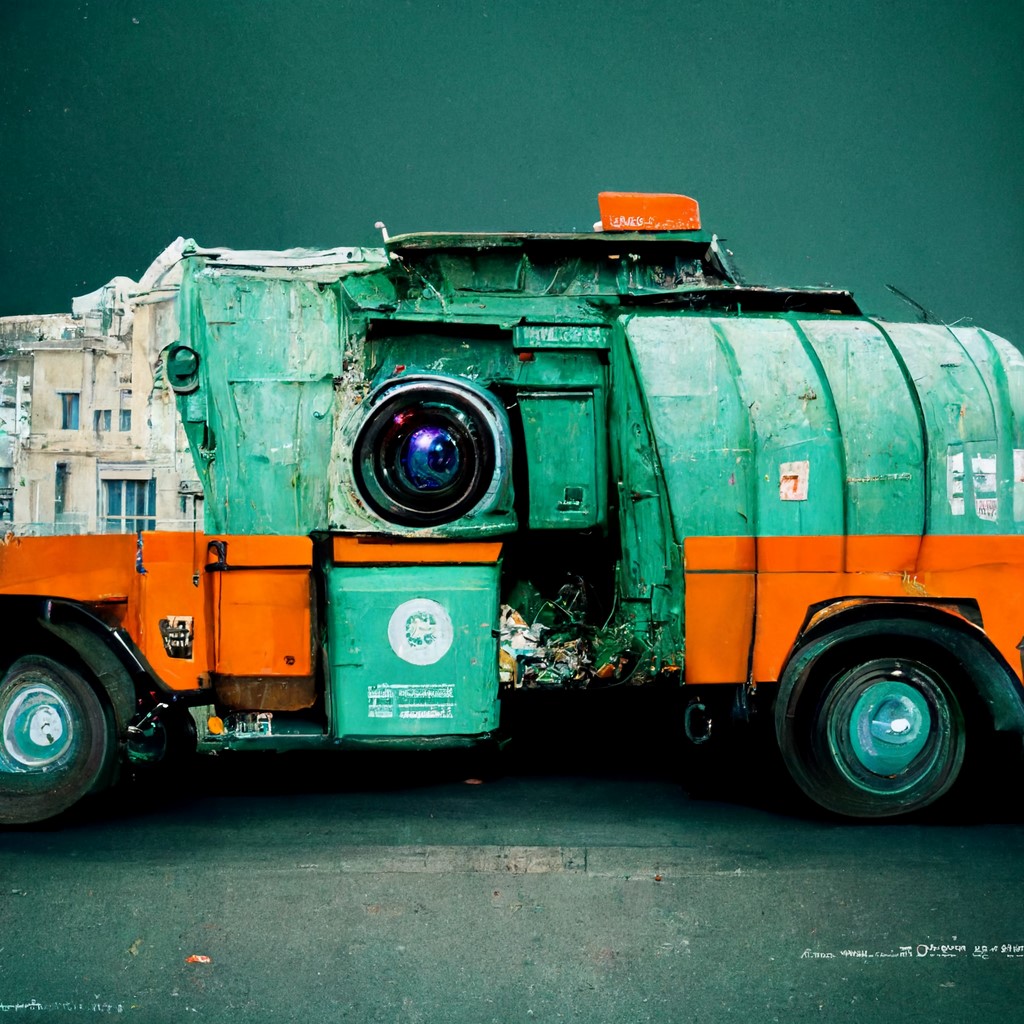 What’s the only city vehicle that goes to every address every single week? It’s garbage trucks. By mounting cameras on garbage trucks and using computer vision, a type of artificial intelligence, the City of Shreveport could faster and more efficiently respond to potholes and stalled roadwork, for example, or stolen and illegally parked cars. (Image generated by AI and featured in LSU’s fall 2022 issue of Working for Louisiana; the keywords were /imagine_garbage_truck_camera_smart_city.)

Safety can also be improved using license-plate recognition as well as general vehicle recognition, based on make, model, color, and perhaps a unique dent or scratch.

“This could help us deal with hit-and-runs more easily and make it possible for us to respond faster to amber alerts,” Hanson said.

He recently brought his own IoT team over to the LSUS Cyber Collaboratory to work on retrofitting camera boxes using Raspberry Pis, small computers affordable enough to fit the City of Shreveport’s supply budget, to enable networking.

“Instead of buying a package solution from a third-party vendor for several thousand dollars, we can work with LSUS to make these camera boxes ourselves for a few hundred,” Hanson said. “And they’re as small and sleek as we can make them—no rat’s nest of wires, everything enclosed in one tight box. That’s really important because residents care about the stuff we put up on poles and in public view. You put something ugly up there, wires hanging out, we’re going to get phone calls.”

One of the students who worked on the garbage truck project is Mark Lowery, now in his final semester of the LSUS computer science master’s program. He took Chakrabarty’s machine learning course in the fall of 2020 after a big career shift. Lowery graduated from LSUS with a bachelor’s degree in English in 2015 and had been working at the public library.

“A friend of mine from LSUS graduated a year after me with a bachelor’s in computer science and got a job immediately,” Lowery said. “With his sign-on bonus, he was able to buy a house and a car. This impressed me and got me motivated to return to LSUS.”

This summer, Lowery did an internship with General Dynamics Information Technology (GDIT) in Bossier City.

“Switching to computer science has definitely been challenging, but I’m holding my own,” Lowery said. “I figure, no matter which job I get, good writing skills will always be an asset, so my English background is not for naught.”

The garbage truck project also involved Scott Isaacs, former director of the LSU Cyber Collaboratory. He and Hanson had several conversations about also using sensors on garbage trucks to map the City of Shreveport’s digital divide between communities who do or don’t have reliable internet access. Instead of census tract data, they wanted block-by-block data to start implementing a municipal internet plan to provide free or low-cost Wi-Fi to those who need it most. Familiar with the computer science phrase “garbage in, garbage out” for flawed input leading to nonsense output, Isaacs and Hanson both saw some comedic irony in using garbage trucks to produce the best geospatial data the City of Shreveport could affordably get, reliably and in real time.

“Computer vision means training a machine to see and recognize objects from images or video,” Isaacs said. “There’s a long annotation phase where you have to tell the machine what it’s looking at—what’s a car, what’s a yard, what’s a driveway—and what’s still a car, yard, or driveway when the camera angle is extreme and there’s shade or rain. Over time, our algorithms became pretty accurate.”

Based on his experience working with LSUS, Hanson is now gearing their ongoing collaboration toward a real-time crime center in Shreveport. 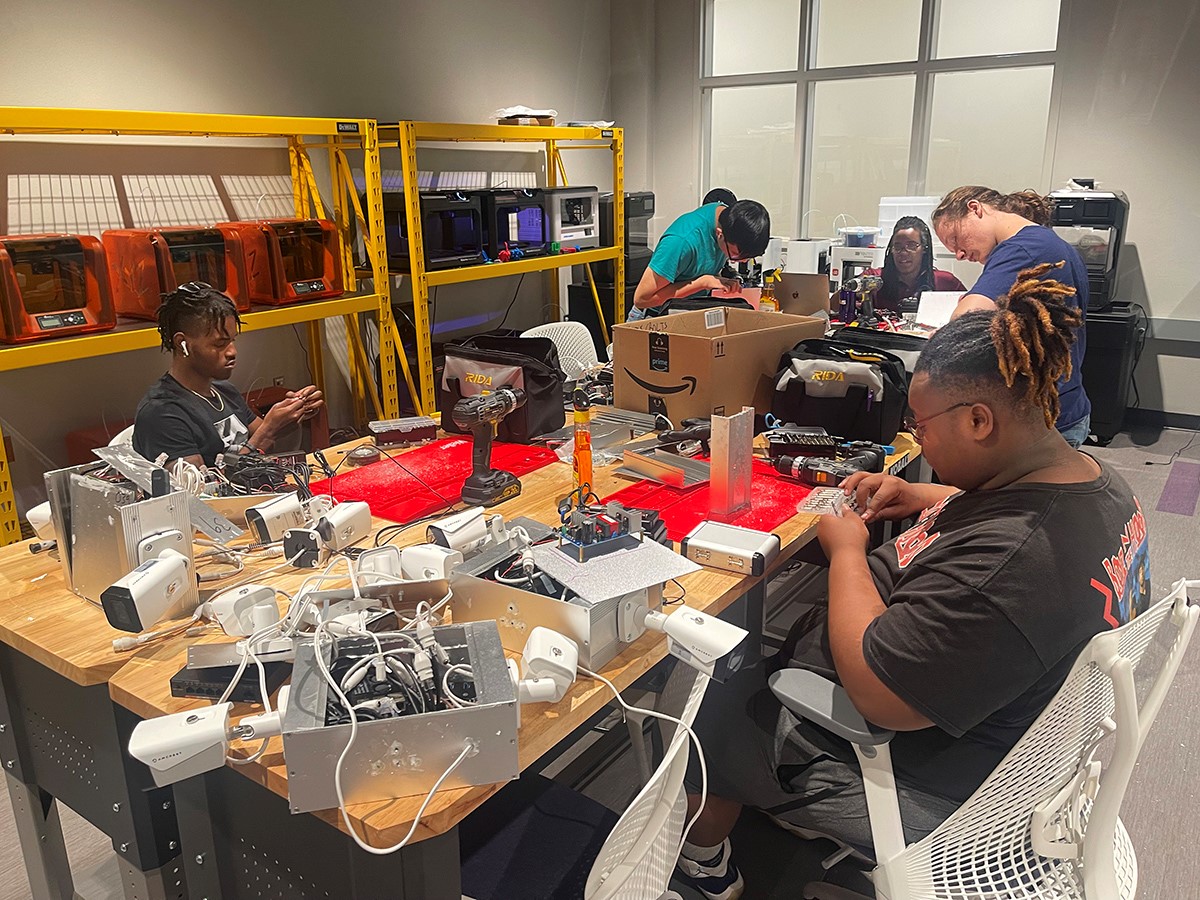 “I didn’t have millions in my budget for a real-time crime center and not only that—we had no cameras anywhere; we needed cameras on poles,” Hanson said. “Again, this is where our relationship with LSUS came in. Together, we can create interesting edge technology that almost no cities have at this point. I walk into the LSUS Cyber Collaboratory and I’m like a kid in a candy store. I’m a huge believer in micromanufacturing, and with LSUS, we can build a box with AI vision for like $300.”

As Chakrabarty is teaching machine learning to yet another cohort of LSUS students this fall, he expects many of the hands-on components and practical solutions the students will develop to be in service of the City of Shreveport.

“I always encourage my students to choose to do meaningful projects for social good,” Chakrabarty said. “I see our program growing as Keith Hanson’s IoT division is growing; maybe six students in my class this time will be dedicated to Keith’s projects. He provides the use cases—our students come up with the solutions.” 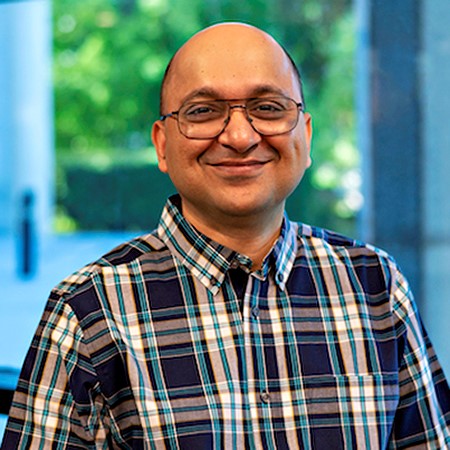 Assistant Professor of Computer Science Subhajit Chakrabarty works with LSU Shreveport students on City of Shreveport “smart city” projects to improve safety and services for residents in the area: “I always encourage my students to choose to do meaningful projects for social good.”

Hanson emphasizes how he, working for the City of Shreveport, never would have the personnel, time, or budget to come up with these solutions by himself, even when tapping other external resources:

“Most of the time, I’m talking to vendors who want to sell us a product packaged up in a box that I can’t touch, right? And I’ve got to spend more dollars to integrate it the way I want to integrate,” Hanson added. “Commercial, off-the-shelf solutions are either terrible or too expensive—one of the two, right—but when you’re working with locals who care about their local economy and their city, it changes the game. There’s no shortage of city needs that can be solved by enterprising young people like LSU students.”

Starting a successful career is closer than you think. With exceptional academics and generous financial aid, LSUS allows you to get your degree close to home while launching you to new heights.